Skip to content
Every day Tweets, Facebook posts, fake news reports, and cyber attacks spread lies that are widely believed. It’s human nature to love gossip, the juicier the better. And technology makes it so easy to share it, before we know if it’s true or not.Researchers are studying how fake news affects us and why humans fall for it. A NYTimes article shared a new study from the Massachusetts Institute of Technology. They examined the flow of Twitter stories and found that people prefer false news across the board – from politics and urban legends, to business, science and technology.

Here are some highlights from the article:

We are assaulted daily with new revelations about how vulnerable we are to hacking, disinformation, and fake news. Sure, cyber espionage has been going on a while, but it’s become far easier for the average person to use it to evil ends. A savvy social media user—especially one with a grudge—can ignite a vicious firestorm of slander, bullying, overt and covert threats, and online stalking.

I experienced this personally. For more than a decade, I endured many cyber attacks from my Vancouver neighbors and public officials, as well as, people who tried to stop me from writing books on Autism. 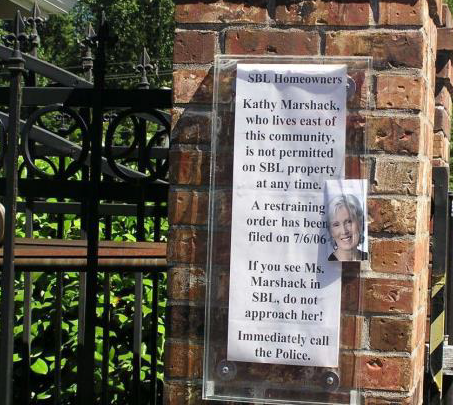 For example, the libelous scroll-like poster you see to the right was put up by my Steamboat Landing neighbors during their reign of harassment. It read,

“SBL Homeowners —Kathy Marshack, who lives east of this community, is not permitted on SBL property at any time. A restraining order has been filed on 7/6/06. If you see Ms. Marshack in SBL, do not approach her! Immediately call the Police.”

Neighbors downloaded my photo from my website then added it to a defaming poster at the front gate of their private riverfront community. The information on the poster is false. There was no restraining order. It was the opposite: I had a court order barring them from publicly discriminating against me. My neighbors came after me anyway, costing me thousands of dollars in attorney fees plus untold damage to my reputation.

It happened because I stood in the way of influential people who wanted to develop property along the Columbia River, at the expense of community safety, by trying to skimp on proper train crossing guard gates.

Could something like this happen to you? Without a doubt. Defending yourself from these invisible and hard-to-trace onslaughts is tough. That’s one of the reasons I wrote my new book, “WHEN EMPATHY FAILS.” I share what I learned and how I survived this and other cyber attacks. If I can do it, so can you.

Remember: Lies only become powerful, when we listen to them, believe them and repeat them. We have the responsibility to check out the truthfulness of a story before we share it. We can make a difference.